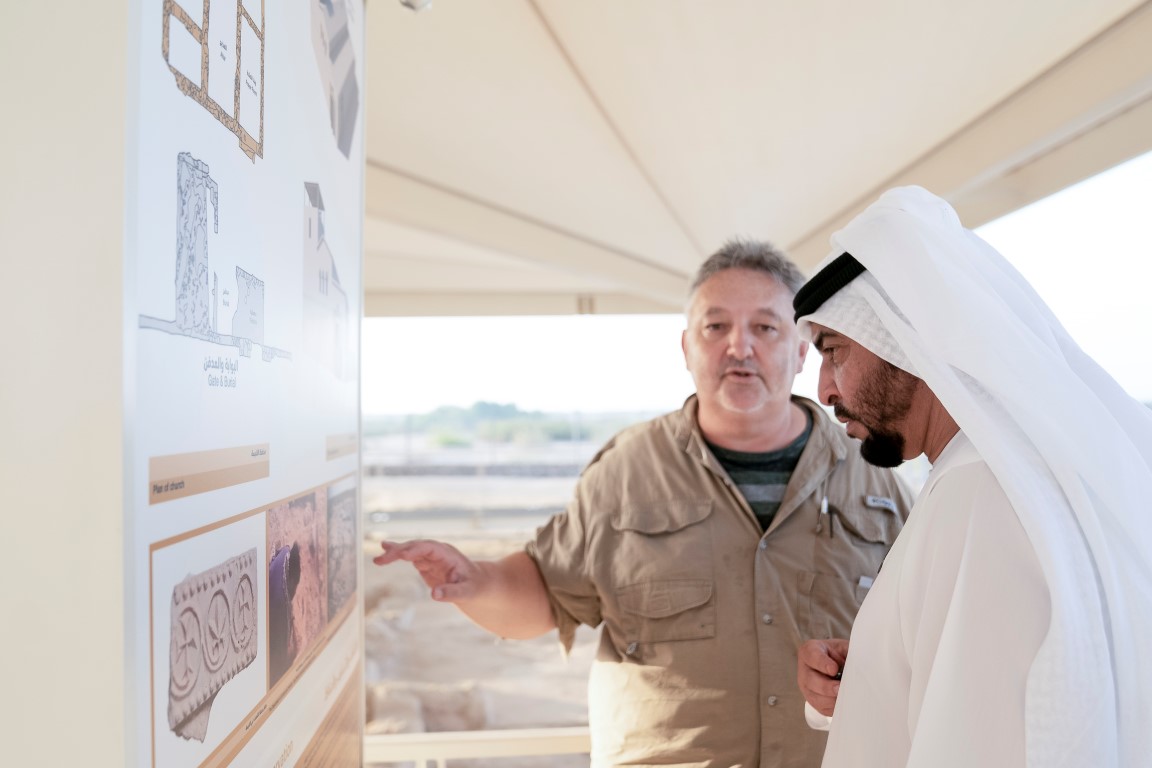 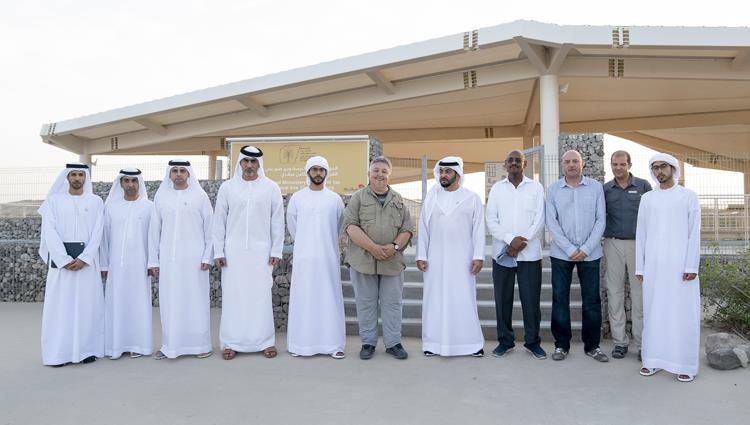 On the afternoon of Monday 17th June 2019 we had the honour of a visit to the Sir Bani Yas Church and Monastery from His Highness Sheikh Hamdan bin Zayed Al Nahyan, Rulers’s Representative in Al Dhafra, and his two sons, HH Sheikh Hazza bin Hamdan bin Zayed Al Nahyan and Sheikh Yas bin Hamdan bin Zayed Al Nahyan. They were accompanied by Sultan Khalfan Al Rumaithi, Undersecretary of the Ruler’s Court in Al Dhafra, Ahmed Matar Al Dhaheri, Director of the Ruler’s Representative Office in Dhafrah Region and HE Mohammed Ali Al Shadi Al Mansouri, Director General of the Al Dhafra Municipality.  This visit was following the completion of conservation and enhancement work carried out at the site by the Department of Culture and Tourism. 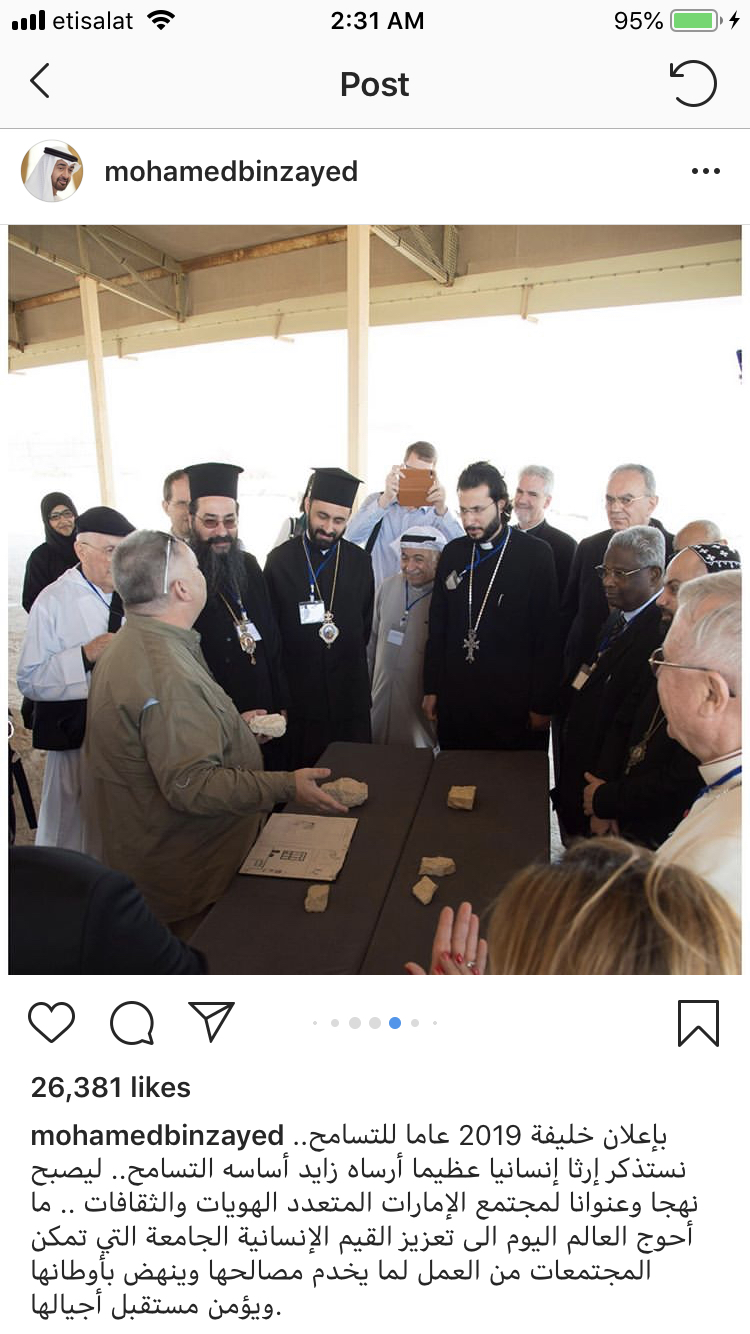 On 15 December 2018 H. H. Sheikh Khalifa bin Zayed, President of the United Arab Emirates, declared 2019 as the Year of Tolerance.

His Highness Sheikh Mohammed bin Zayed Al Nahyan, Crown Prince of Abu Dhabi and Deputy Supreme Commander of the UAE Armed Forces, posted on his Instagram account a photograph of myself showing to the Christian Bishops of the Gulf some of the pieces of decorated plaster stucco discovered at the Church and Monastery on Sir Bani Yas Island. This photograph was taken during the visit made by Sheikha Lubna Al Qasimi, the former UAE Minister of State for Tolerance, and the Christian Bishops of the Gulf to Sir Bani Yas on 17 January 2017. 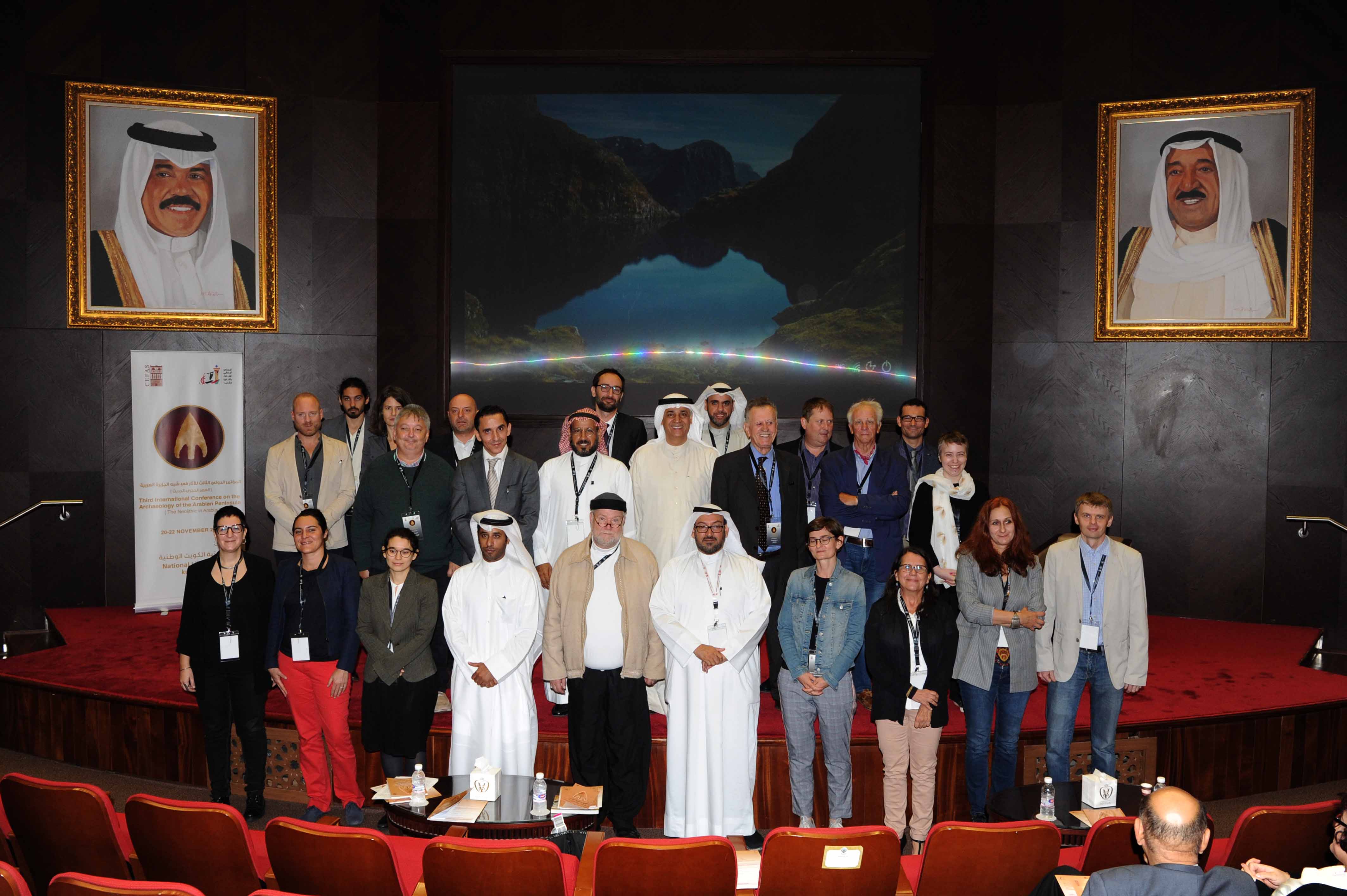 Third International Conference on the Archaeology of the Arabian Peninsula (The Neolithic in Arabia) – 20-22 November 2018, held at Kuwait National Library, Kuwait City, Kuwait. 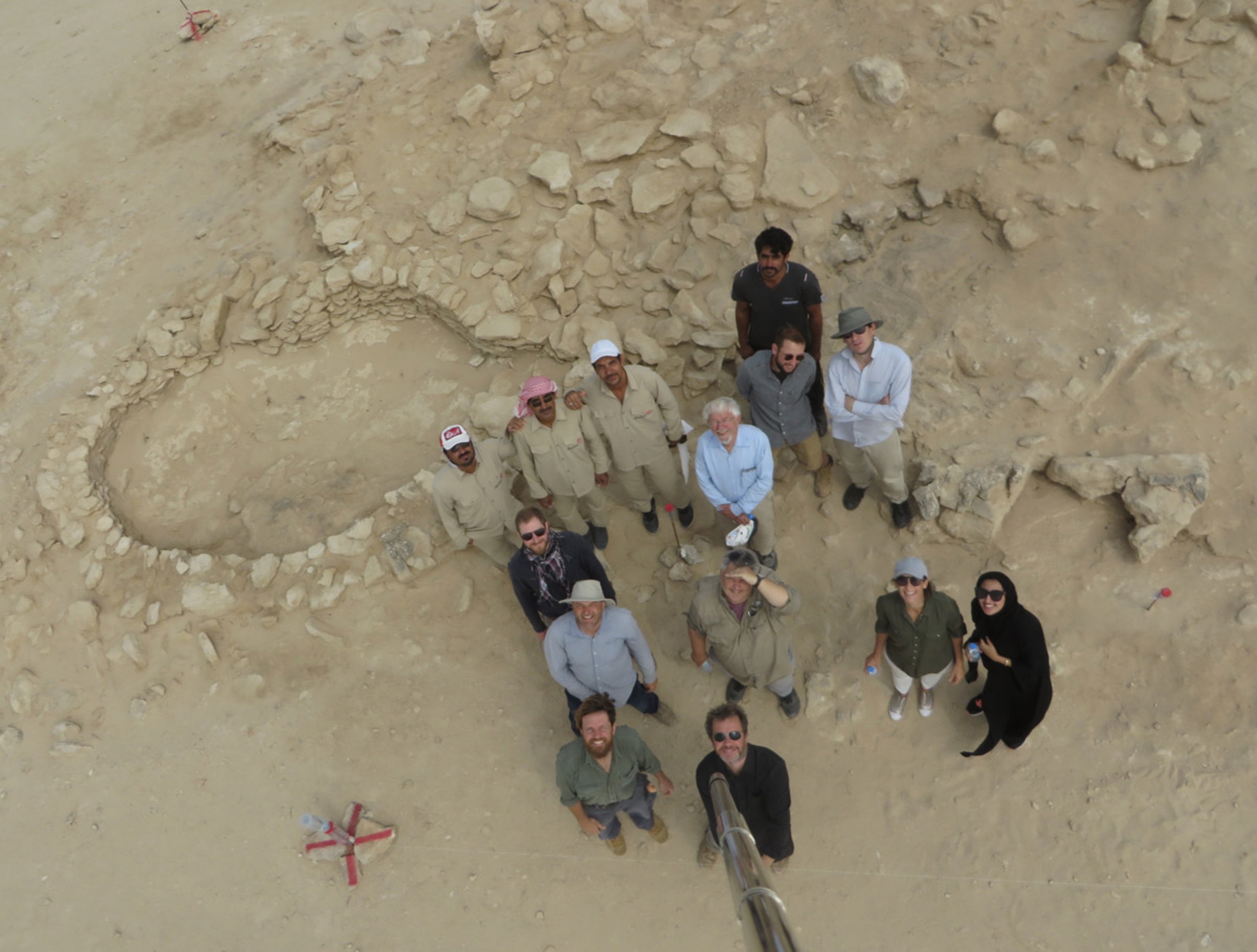 On Wednesday 28th February 2018 we had a visit to the Marawah MR11 excavations from a team from the Zayed National Museum (Noura Al Moubarak and Emma Thompson) accompanied by Peter Magee (Head of Archaeology at the Historic Environment Department at the Department of Culture and Tourism). 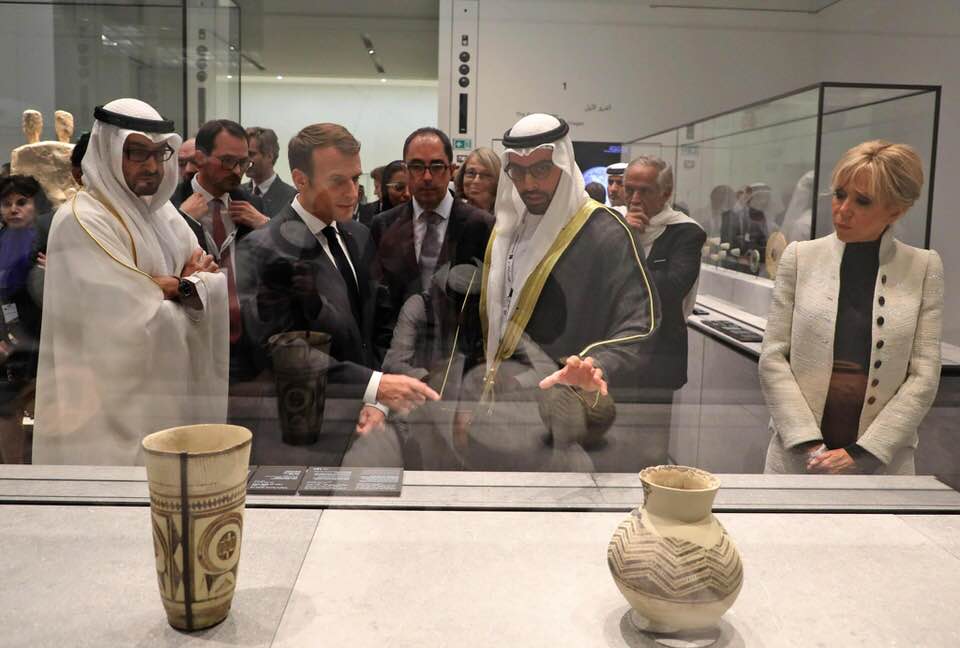 Macron points to the Marawah Ubaid vase as our Chairman, HE Mohamed Khalifa Al Mubarak (Chairman of the Department of Culture and Tourism) explains about our recent excavations on Marawah Island. 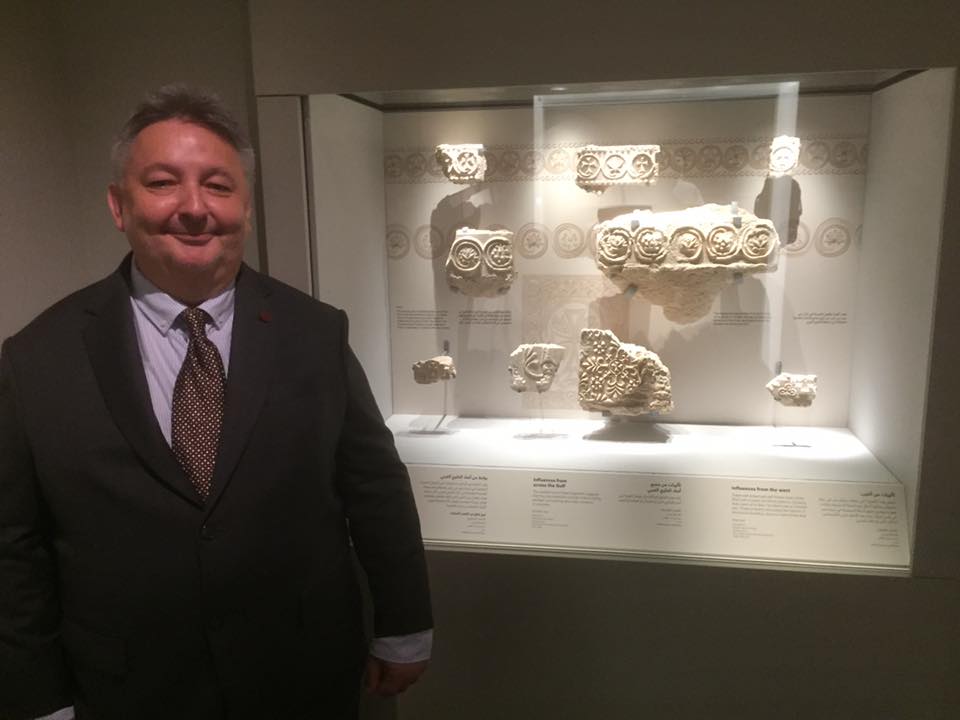 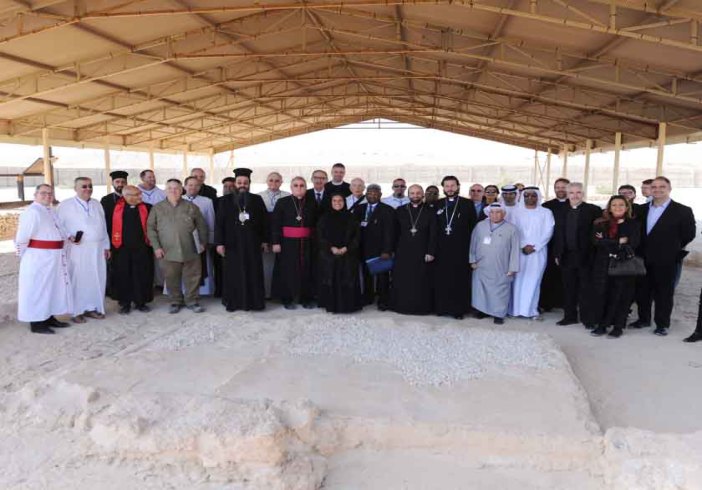 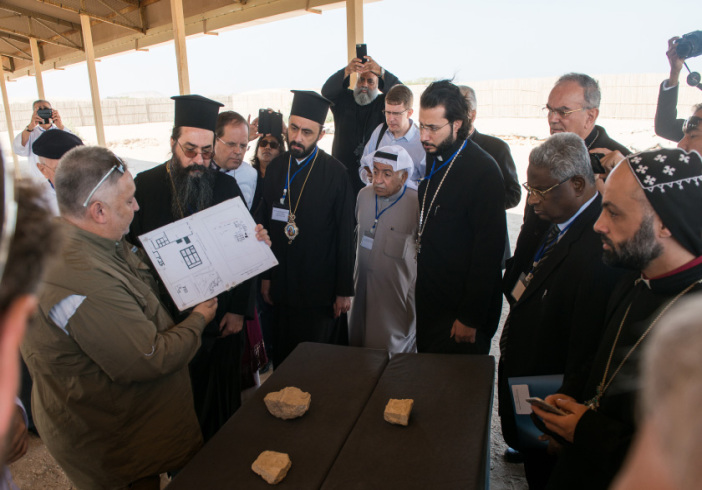 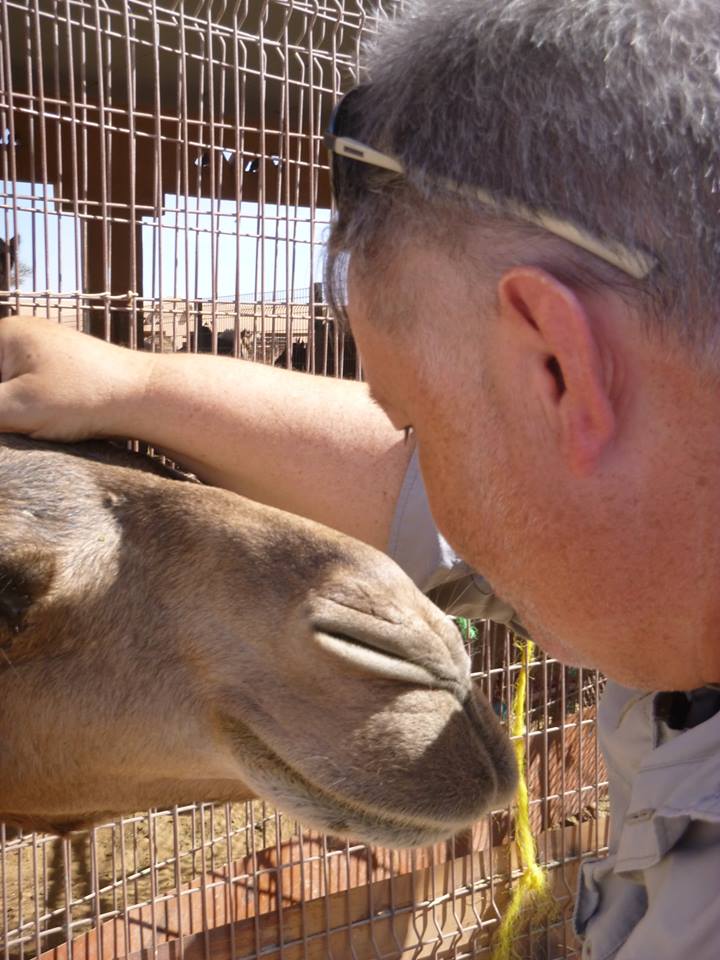 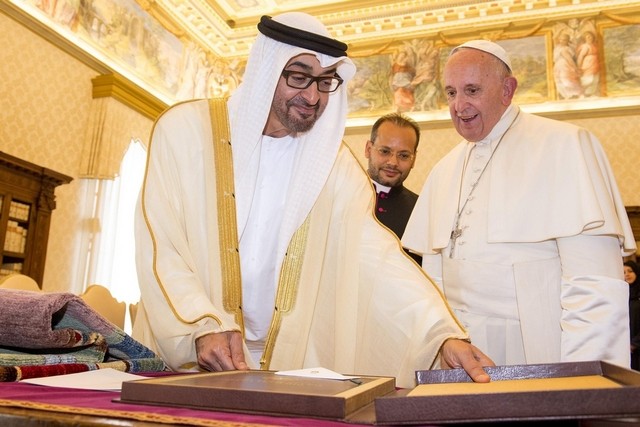 His Highness Sheikh Mohammed bin Zayed Al Nahyan, Crown Prince of Abu Dhabi and Deputy Supreme Commander of the UAE Armed Forces, gives Pope Francis a photo book of archaeological findings on Sir Bani Yas Island. I helped to prepare this special book about Sir Bani Yas and the Church of the East. It featured details of our excavations of the church and monastery on Sir Bani Yas Island, as well as showing some of the plaster stucco decoration with crosses found at the church (15 September 2016, Photo credit: WAM). 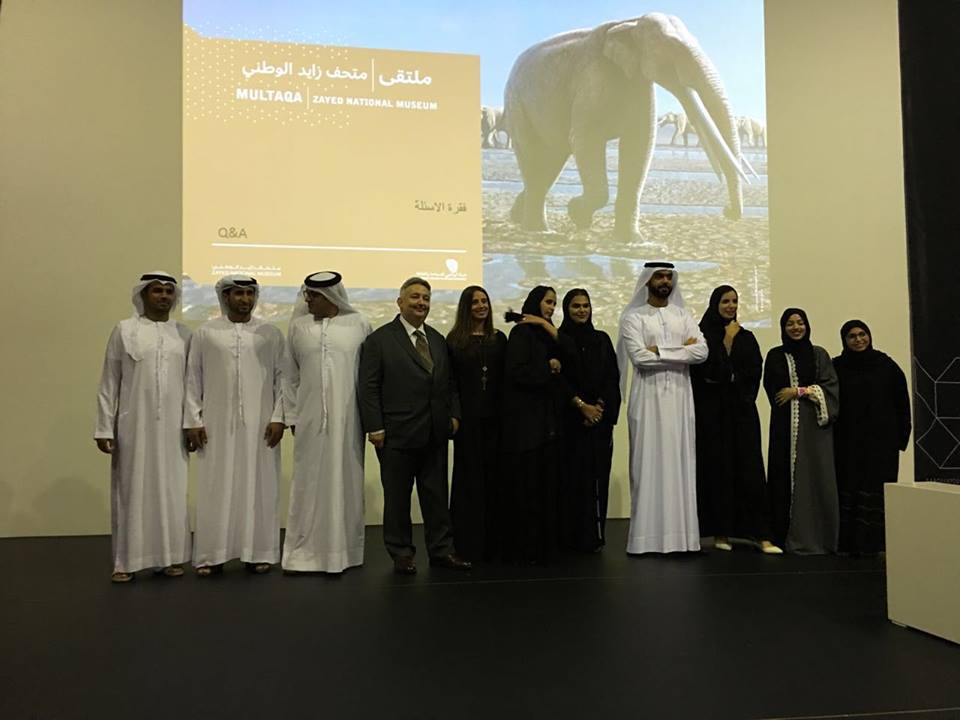 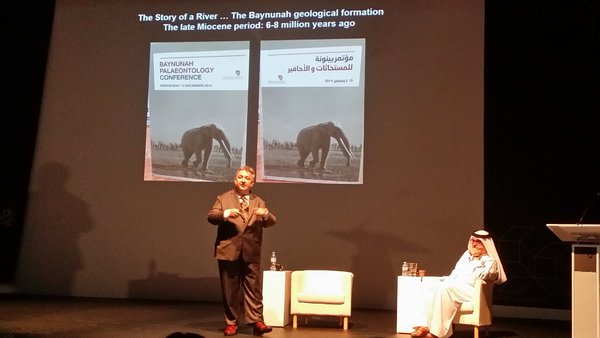 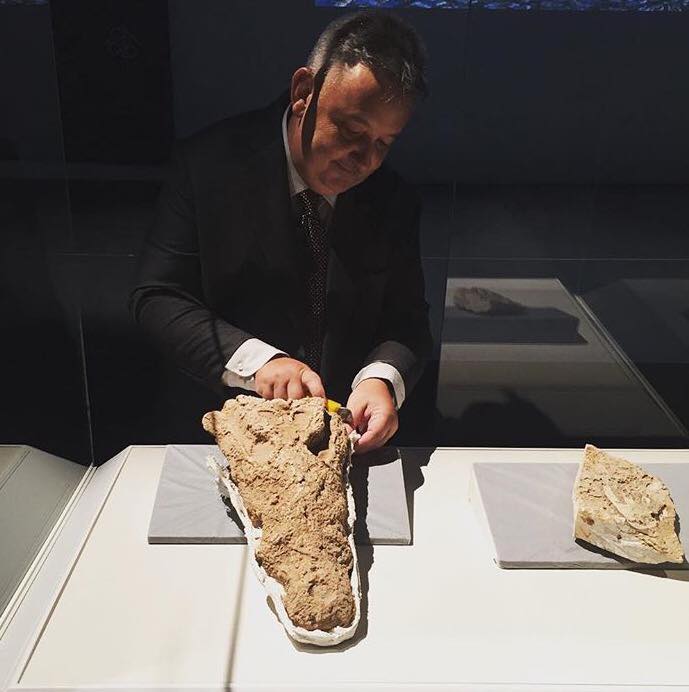 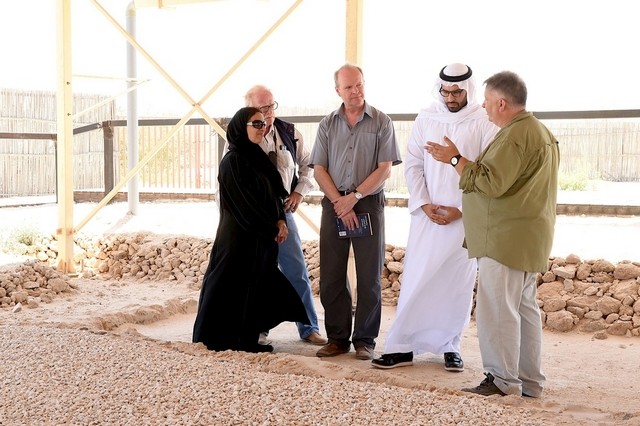 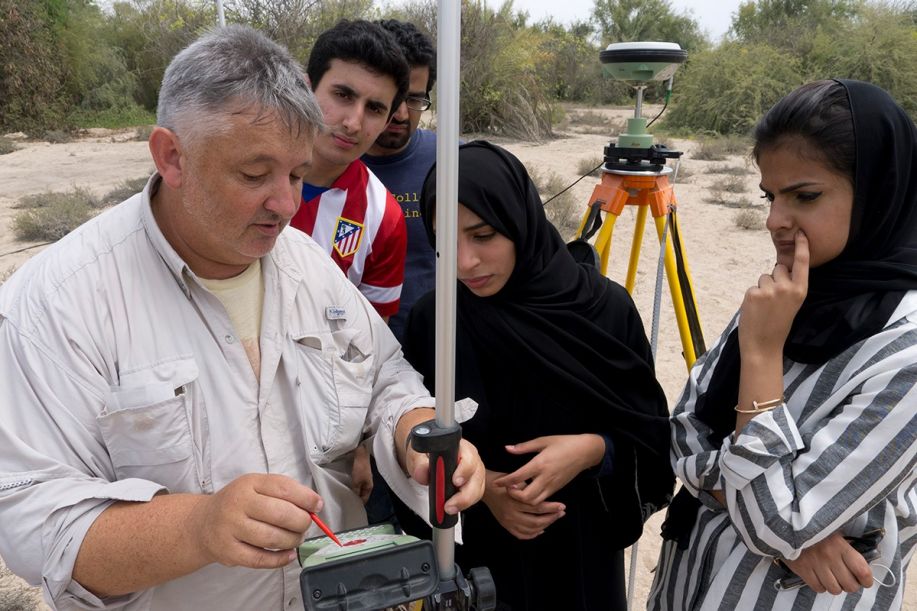 Dr Mark Beech gives training to NYUAD students in the use of Leica GS14 differential GPS surveying equipment at the Neolithic Ubaid-related settlement on Dalma Island – April 2016. This was part of a fieldwork trip to investigate the heritage of Dalma Island, planned by Dhakira – the Center for Heritage Studies in the UAE, New York University Abu Dhabi (NYUAD), together with the Historic Environment Department from the then Abu Dhabi Tourism and Culture Authority (TCA Abu Dhabi) (Source: Professor Robert Parthesius – Dhakira Center for Heritage Studies in the UAE, NYUAD) 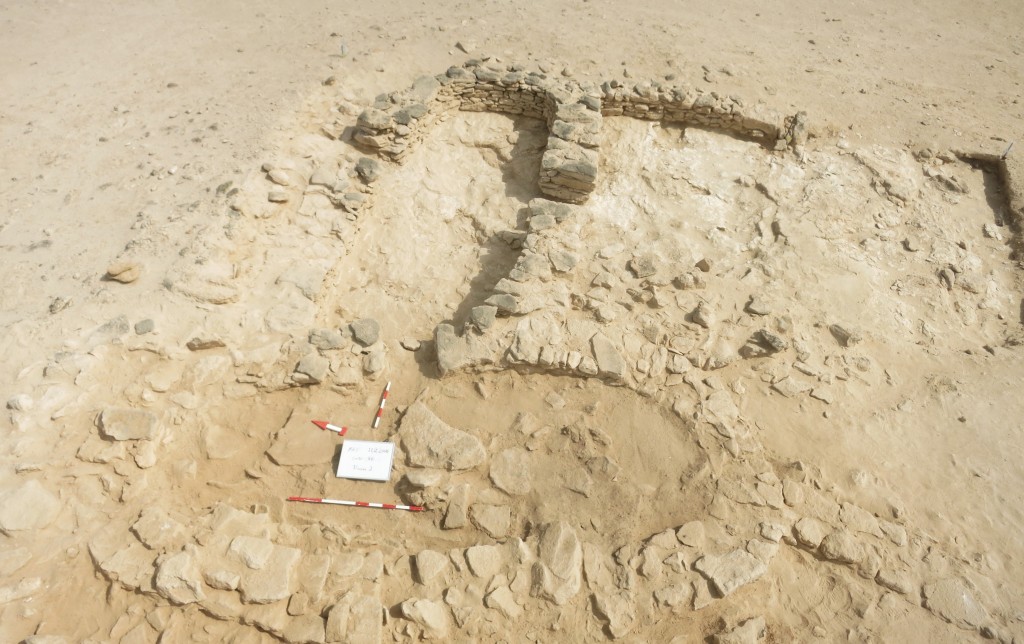 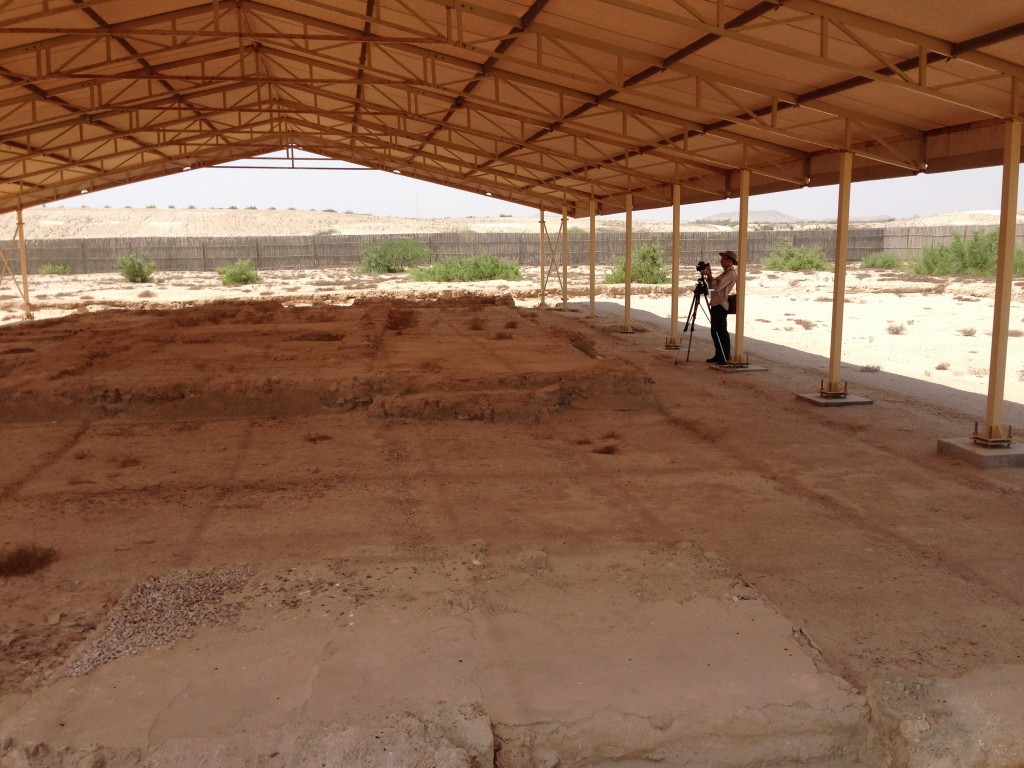 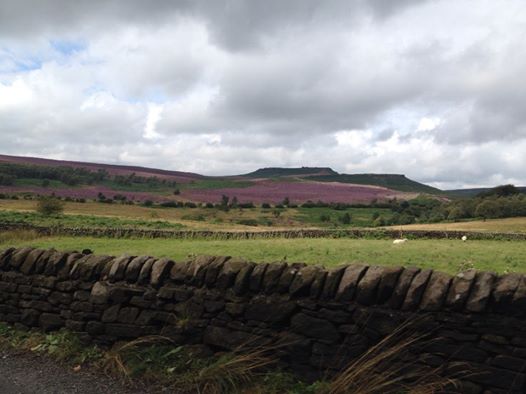 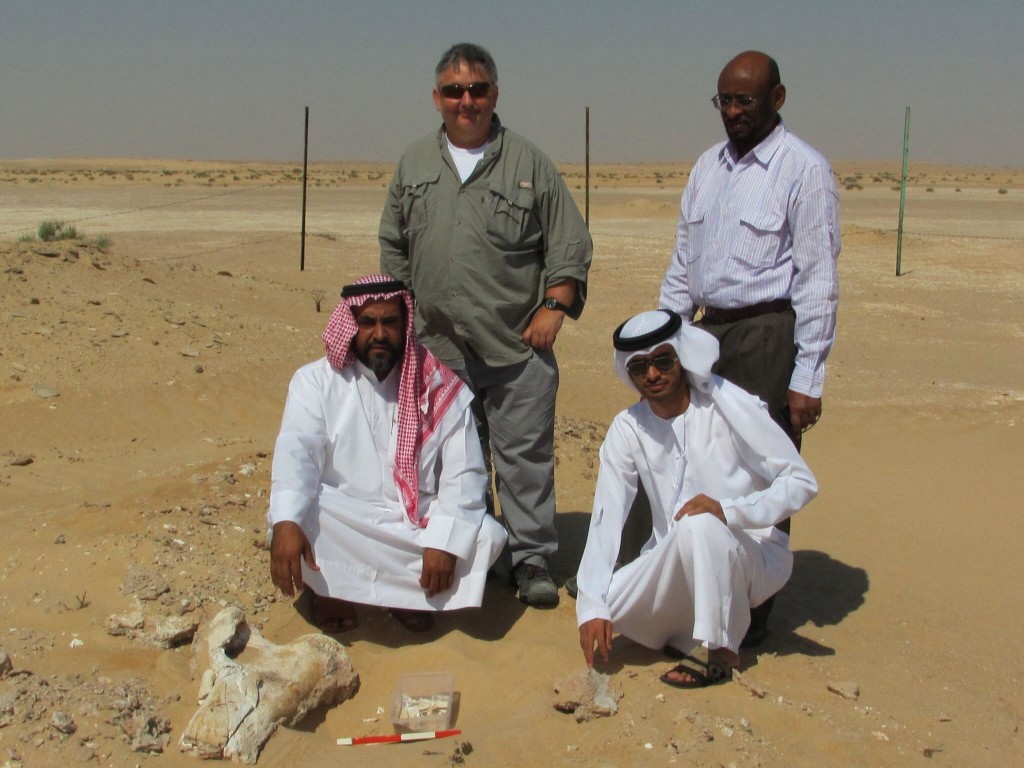 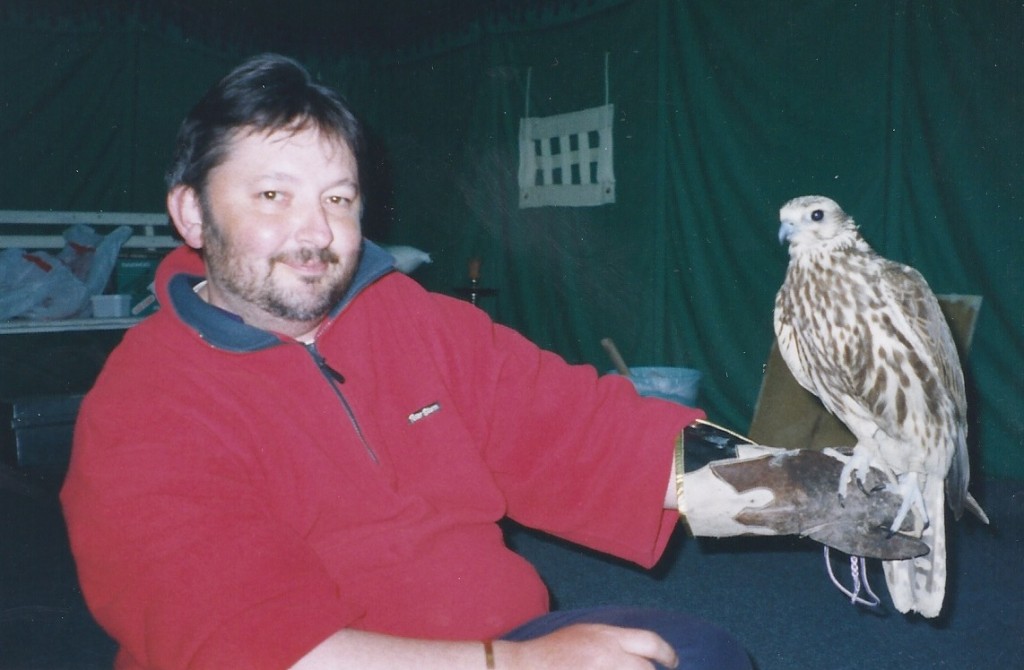 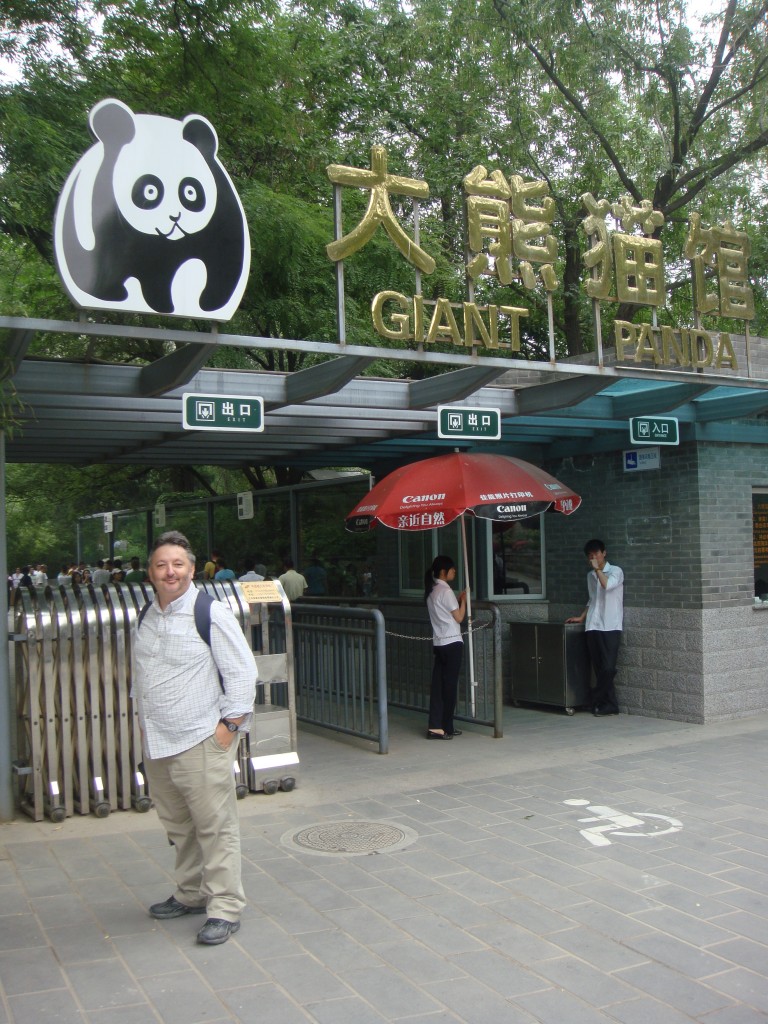 Outside the Giant Panda enclosure at Beijing Zoo (May 2009) 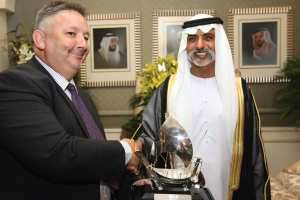 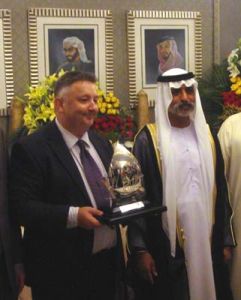 Receiving the Sheikh Mubarak Bin Mohammed Natural History Prize for 2008 from H.H. Sheikh Nahyan bin Mubarak Al Nahyan. This is an award given by the Emirates Natural History Group in recognition of services to archaeology of the UAE (2009)

I enter the Grand Tomb at the Hili Archaeological Park, whilst a french archaeologist looks on… (2007) 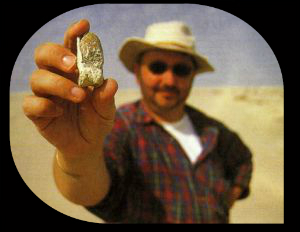 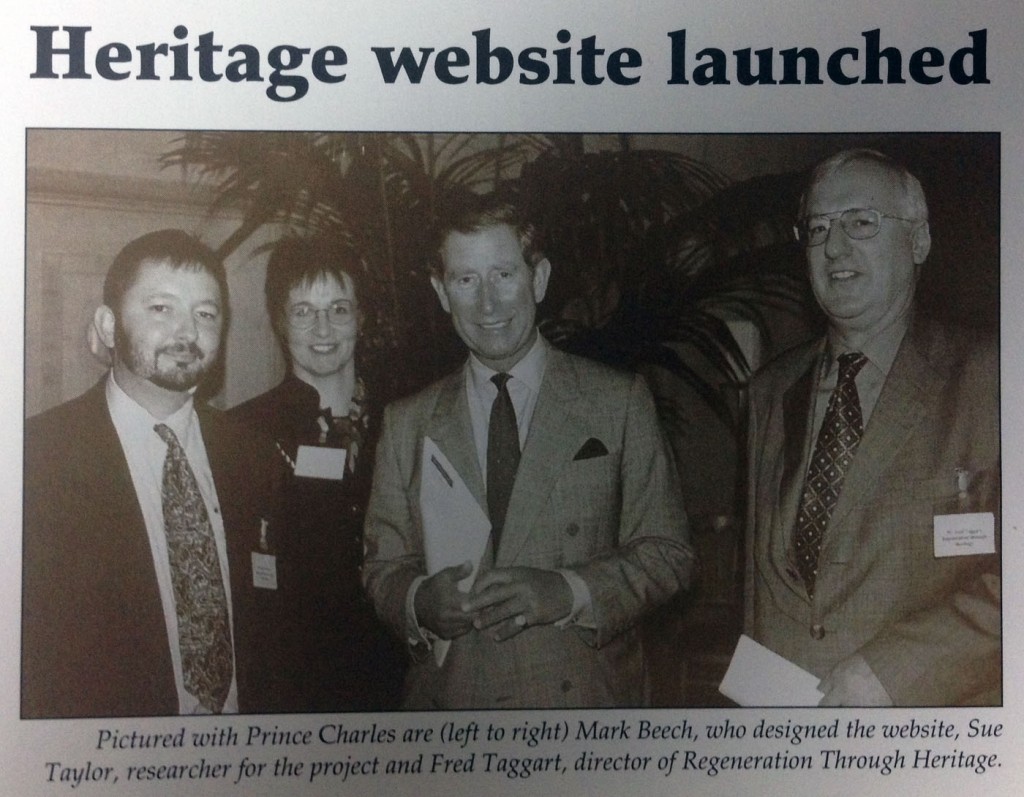 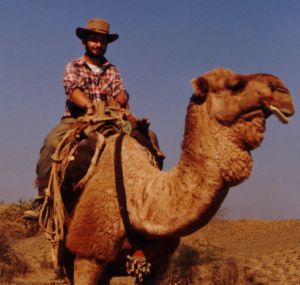 Riding on a camel in the Pabbi Hills, Punjab province, Pakistan (1989) 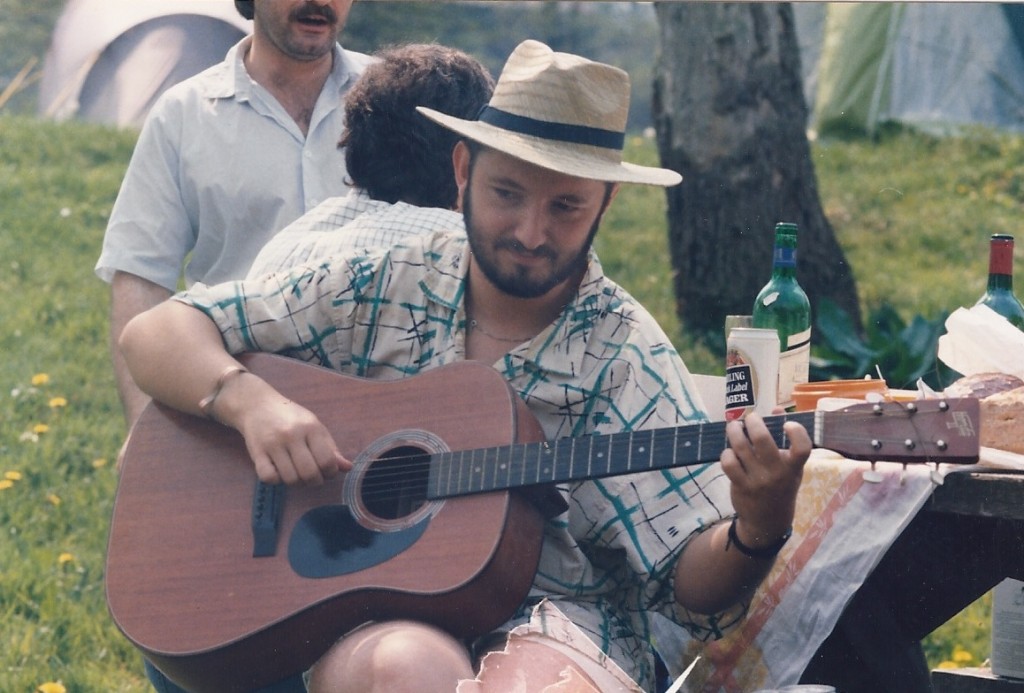